Gustavo Dore originated in Juiz de Fora, a city in the Southeast of Brazil. Currently, he is an entrepreneur based in Tokyo. Dore came to Japan on the MEXT scholarship and got a Master’s degree from Keio University (Media Arts and Design). He shared with us the path that he took; from getting a Bachelor’s degree in journalism in Brazil to becoming the co-founder of an HR startup in Tokyo. We will also touch on the opportunities he had during his time as a MEXT scholar. These opportunities helped him gain different experiences along the way as well as helped him work in a field that he likes.

How did you become a MEXT scholar?

I studied “Marketing Communication” as an undergraduate student at Faculdade Metodista Granbery in Brazil. Then after graduation, I applied for the MEXT scholarship to study “Interaction Design”, which nowadays is well-known as “User Experience (UX) Design” at the Graduate School of Media Design at Keio University. That was back in 2009.

Back then, I was involved in a project that made interactive furniture, such as chairs with attached sensors showing you whether you are sitting correctly or not.

If you are thinking of enrolling in a Master’s program, I would suggest that you try to get as many credits as possible in the first year so that you can focus more on your research in your second year.

Back then, I was about to enter the Doctoral program, but my professor got a call from someone at Sony, who had seen my project. He remembered me and contacted my professor to ask if I wanted to join their team.

Joining and becoming a member of Sony 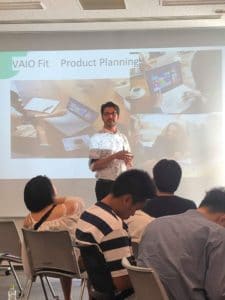 Even though I got a job offer from Sony, they didn’t give me the job right away. I had to go through the process of passing several interviews, too. In the end I got to choose which team I wanted to join. Once they decide to hire the candidate, they send the their CV to all the departments, and then the head of the departments will discuss things like “I want this guy or that guy” and then maybe 3 or 4 departments express their interest in you. In this case you will be able to choose or rotate.

My job was to connect the “Sales/ Marketing” team with the “Engineering” team. The engineers are the ones who make the products, and I was in charge of making sure that the sales/ marketing team knows how to promote these products. I was there for almost 3 years, until Sony decided to sell the division I belonged to. That’s when I had to make a decision: either stay or leave.

Why did you decide to leave?

Because I wanted to grow faster.

Now I have my own company. Compared to my former coworkers I have a different idea of life. It’s good to be at Sony, so people working there do not really think about to changing their job. I discussed my life plan with my friends and they told me about Recruit. I also saw a job posting at an agency about the same position at Recruit, so I just went for it.

How was it at Recruit?

After passing three interviews, I got the offer. I worked there as a UX designer, and in just six months, I already had people working under me. I was a small manager. This experience gave me the confidence to start my own business later.

The great thing about Recruit is that no one thinks about staying there forever. Yes, most people work there to earn billions of yen, and then they start their own new business. We used to discuss and compare our salaries and discuss how to make more money. Everyone loves to work, the foreigners are very active, and the female employees are working hard and even move up into management. That’s the culture of Recruit.

Also, most people in Recruit have side businesses and stuff. That environment motivated me a lot to start my own business. I could discuss ideas with the people I loved to work with and invite them out for coffee or even over to my house to discuss some more.

And then you left Recruit to start your own business. Tell us about your journey from working at Recruit to becoming an entrepreneur. 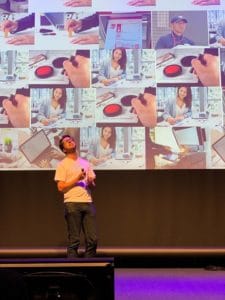 As I said, I could talk about ideas with people I like to work with while being at Recruit. We brainstormed through many weekends hanging out at coffee shops all day and made up some business ideas. And eventually, we settled down with the “engagement survey” idea, which became Motify – WelcomeHR.

If a company wanted to know whether their employees are happy or not, there was no proper tool for them to find out at that time. I did some research, and there weren’t many reliable companies that provided such a solution in Japan back in 2015. That’s it!

The experiences I got and network I built during my time as a student and my time at Recruit helped me embark on this journey. Back when I was a MEXT student at Keio University, all students had to join real projects. A “real project” means a project which is being backed by a private company or by the government. The first project I joined back then was supported by Sony, who funded research on virtual reality seats in movie theaters. The second one was backed by the Singaporean government. They own the IP of our output, and they paid for all the research expenses. Thanks to these projects, I gained experience in discussing with companies about investment in projects. I think I am glad that I enrolled in Keio University, which is open and very practical. Some of my colleagues’ friends have their own business by now. By that time, I didn’t have enough confidence in myself, but the time at Recruit gave me the confidence that I lacked.

How about your private life? Relationships, friendship, and so on. 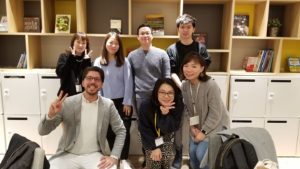 Let me conclude it in one phrase: Japanese or non-Japanese, I think friendship bonds are close and strong when you overcome hardship together.

I made non-Japanese friends during my time as a student, and we are still in touch with each other. We used to live in the same dormitory in Kobama, so we became lifetime friends. They made time to see me when I traveled to their places.

And I have very close Japanese friends, too. When we were students, a friend of mine started his own business, and I helped him (no money involved, of course). He started a new bag brand called Semi, and we were discussing things like, “if the brand grows, we will do this and that”. I made my closest Japanese friends while helping them with their businesses. So what happened with me then was that we decided to start this company and help Semi. The company didn’t do great at the start, so we would meet every weekend and do anything we could and liked doing, such as creating websites, do some marketing, stand in the shop, etc. That’s not really my thing, but I love these people, so I decided that I would support them. And that became the basis for our friendship.

You married a Japanese lady and have two lovely daughters. How are you looking at life in Japan now? 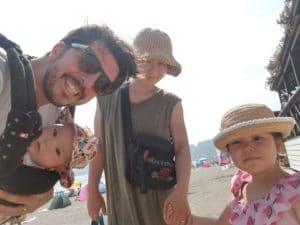 No one is deadly poor here. It’s super safe, and everybody has a chance. I think that’s my main point of happiness here in Japan, and I feel terrific knowing that my daughters are growing up in Japan.

I have a friend, and one of his daughters wanted to study birds. She went to Hokkaido University to study birds. The fantastic thing is that everybody was so supportive of her studying birds. That’s impossible back in Brazil. Everyone would try to stop you from pursuing such a dream because it wouldn’t make any money. But here, it is ok to try and chase whatever you want, because there are so many possibilities and everyone has a chance. 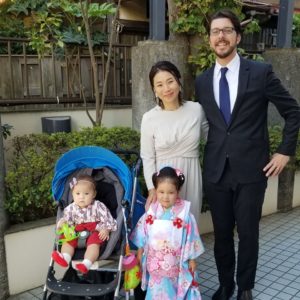 As for my daughters, of course, I will do my part to encourage them to step out of their comfort zone. But the whole point is that here in Japan, they have a safety net that allows them to aim higher. Because if you fail, there’s always a way out. I want to teach my daughters that pursuing their dreams might be a hard thing to do, but they shouldn’t worry too much because they have insurance and can still make money as long as they keep on trying.

Everything that matters takes time. Some people get lucky, but most of us will face a lot of hardships along the way. This is normal. All you can do is endure and move forward. I wish my best of luck for your journey to success in Japan!

Such a wonderful experience. Thank you so much for sharing your story with us.