Last May 26th Ms. Olga Zielinska, a tour guide specialized on the Tohoku region, took 11 international students on a journey through time and space. The itinerary of the tour consisted of a walk through 5 temples and shrines in Kitayama, a sector located in the Northern part of Sendai.

With short stories, fun facts, and special guests, we discovered the history of Sendai from the 1600s until nowadays. Within 3 hours Ms. Zielinska taught us about expeditions to Europe by 17th-century samurais, attempted murders, Sendai’s greatest festivals, post-second world war reconstruction, Japanese burial customs, the hidden symbolism in shrines and many more topics. Even though each one of the temples and shrines we visited are run by different families, and in some cases different schools of Buddhism, they are all bound to the history of Sendai and that of its powerful founder, the legendary samurai and military tactician, Date Masamune. 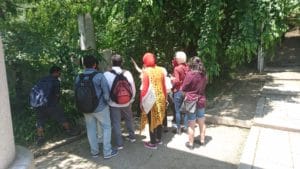 Who was he? Was he superstitious? Did he have any contact with foreigners? How has Sendai changed throughout the years? The answers to these and many other questions can be found in the next version of the tour. Keep reading the MSA monthly newsletter and keep in touch with the Tohoku committee for more events!

(Written by Manuel Campos, Head of our Tohoku team.)